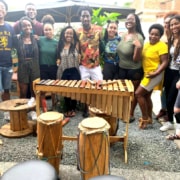 Colombia might be all about salsa, reggaeton, and Latino vibes at first. But make no mistake about it, the country is as diverse as it gets. Whether it‘s nature, culture, music, or people. And the pacific region often gets overlooked for its potential which can be truly surprising! If you are interested in seeing the different side of Colombia, where Afro-Colombian culture is present, then look no further than the Petronio Alvarez Music Festival. A six-day affair that not only opened a local economy, helped to preserve afro culture but also became one of the best places to immerse in the rhythms that came along and difficult way from our ancestors. Let‘s find out about the festival in one quick glance!

The Petronio Alvarez Music Festival didn‘t become one of the most important musical events of afro culture in Latin America by accident. Founded in 1997, the festival placed itself through experience, consistency, and legacy as a venue where afro Colombian heritage can thrive and showcase its legacy.

The original mission back then was to unite artists from Colombia‘s Pacific Coast region and allow them to celebrate and express their culture.

Since then, the festival quickly grew to become a diverse and rich event with huge crowds popping up. Regions such as Guapi, Timbiqui, Tumaco, and others join together to produce music in a variety of genres: from marimba and chirimia to freestyle and more!

Yes, the festival takes place in Cali, the world capital of salsa. So, why Cali, after all? A popular question asked by many just to find out that this city is perfect for such an occasion.

The city is essential for learning more about western Colombia. One of the biggest and most popular cities in Colombia easily attracts both local and international bands with Pacific indigenous sounds to play.

Also, the Cali is simply bursting in innovation, creativity and not only because of salsa. Gastronomy is excellent here, shopping is extensive, fashion is glamorous and the city is filled with intriguing activities!

Sounds & Traditions of the Pacific: What to Expect

Here, it is all about the sounds of the pacific and afro-Colombian culture and heritage. People of all ages will come to throw one of the biggest celebrations that are formed and molded by all of the aspects of Pacific culture.

Within the six days of the festival, you can expect to see, hear and experience a lot. Techniques and sounds passed from generation to generation will be on fire. A musical frenzy to say the least!

But let‘s see what you can also expect besides the musical side:

The festival is fun, beautiful, unforgettable and iconic. A once in a lifetime experience to capture. 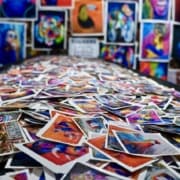 Not too long ago, 10 ar 20 years ago, not even the most adventurous soul would step foot inside Medellin. Dangerous and violent, it was where druglords ran the show, boundless to laws and rules. Fast-forward to the present days, and the country of Colombia is one of the prime tourist destinations in South America with Medellin leading as an example and with a story of how creativity, art, and music can shift and transform lives even in the most chaotic and damaged societies. And nothing proves it better than the vibrant Comuna 13 neighborhood. Lets this be a gentle introduction to a beautiful spot in Colombia, that deserves to be on top of your bucket list!

Colombia itself has been touched by one of the roughest and violent history periods in Latin America. But when it comes to the once most dangerous city on the planet –  Medellin and its notorious neighborhood known as Comuna 13, the turbulence of its past is hard to match.

Whether it is between the 1980s-1990s when the neighborhood was controlled by dangerous groups loyal to Pablo Escobar or the controversial siege by the military and police in 2002 known as Operation Orion.

It might have seemed that Medellin and Comuna 13 were sinking deep, in the oceans of violence. But somehow, the winds of incredible change found their way here. All with the help of art and music.

Music is one of the two vital puzzle pieces that sparked positive ideas and started paving the way for peace which transformed Comuna 13 not only to a quiet neighborhood but one of the most popular places to visit in Colombia, receiving thousands of tourists each month.

While rock music surged in great popularity in Colombia during the 1980s together with the biggest metal and punk underground movement on the continent later in 1990s, it was, after all, one genre in particular that stood out and brought positive winds of change together with its toe-tapping rhythms.

Here in Comuna 13, it was hip-hop music that pushed anti-violence transformation the most and became the main way to express peaceful views.

To this day, hip-hop music continues to be an important method of expression, particularly as a way to educate and provide children with an alternative to violence.

Striking graffiti and vibrant street art are without a doubt, one of the first things you will notice upon arrival. Whether its whole Colombia or the city of Medellin itself.

But the diverse and colorful art of Comuna 13 neighborhood harbors more than just fascinating paintings and sparkling colors. It is a story of both pain and hope, geared towards peace, transformation, and a positive change.

Alongside music, the splendid and creative art played a crucial role in bringing optimism and positive changes, that would eventually transform the neighborhood and the whole city of Medellin to something truly incredible, beloved by many today!

Experiencing everything first hand hasn‘t been easier and safer in both Colombia and Medellin than ever before. Medellin, in fact, is the only city in Colombia that has a metro system, something that the locals are very proud of. But that‘s only the tip of an iceberg!

The amazing metro cable system gliding above the city roofs connects all steep hill neighborhoods, all the way up to the mountains. An incredible chance to overview the whole city of over 2 million people and witness a bridge that led to unity.

In 2013, Medellin was chosen as the most innovative city on the planet due to its advances in education, politics and social development, following many more awards after that and making the city one of the most attractive places to live in Latin America. And Comuna 13 is a prime example of how even the darkest moments can‘t block the light that shines at the end of the tunnel.

Meet an electric escalator that is 1,260 feet long, inaugurated on December 26, 2011, in Comuna 13, making it one of the first of its kind in the world! In addition to innovations like these and magnificent street art, Comuna 13 offers a journey accompanied by lovely cafes, graffiti & city tours, breathtaking panoramas of Medellin, and most importantly, a strong feeling of safety all the way through. All of that, from once the most treacherous places on the planet to one of the most intriguing spaces of art, poetry, drama, music and a hot tourist destination. Wow!

Brazilian popular culture continues to play a crucial role in how people express themselves. And to this day strong cultivation for cultural expression continues to be music. The music and culture of Brazil blend various influences beautifully and harmoniously. From the popular and legendary Samba to the unique Forró to the iconic Bossa Nova, and dozens of other music genres in between. Brazil encompasses a lot of diversity! Therefore, our focus shifts to one particular state that was once dominated by agricultural and slaving, but overcoming everything, Afro-Brazilian descent flourished as an artistic spirit reshaping the state of Bahia, and Brazil, especially through its music.

It All Starts With Drumming

When it comes to Afro-Brazilian music, drumming is one of the most vocal points, the beginning and the end of this intriguing art form.

Traditional instruments such as berimbau (a bow-shaped instrument), atabaque (a tall wooden drum) or the smallest Brazilian drum The Tambourim with many others deliver energetic and distinctive Afro-Brazilian rhythms such as Samba, Maracatu, Samba Reggae and others.

The percussion instruments of Brazil are deeply connected to not only African history but South American cultures as well, and sometimes it makes a perfect pair with intriguing instruments such as agogô bell.

Drums pave the way for diverse musical ways of Afro-Brazilian culture which encompasses unique musical genres and even sports – all joint together for one unforgettable dance.

While Afro-Brazilian musical ways are wide and diverse, one of the most fascinating examples we can take is Capoeira. Born in the Bahia’s sugar plantations where slaves secretly practiced self-defense it is a very unique Afro-Brazilian art form that blends martial arts, drumming, music, and dance into a thrilling experience.

The rise of such genres like Capoeira or even Samba acted as a resistance, a spark of reunion, restructuring the Brazilian culture forever.

Today, Bahia is a land of contrast and energetic rhythms that touches our soul and most of the things here are enriched in African cultural traditions. Whether its larger than life carnivals, delicious street food, ballet performances or a one of a kind instruments, there‘s is everything and more to discover and explore within Afro-Brazilian cultural realms. And there‘s no better way to properly experience it than by visiting the capital of Bahia State, the center of Afro-Brazilian culture – El Salvador.

Its historic and picturesque center is a UNESCO World Heritage Site with protected nature parks around providing fantastic outdoor recreation while carnivals are a show that attracts millions to a drumming and music extravaganza. And how about those 80 kilometers of beaches and a party that simply never ends?

Everything in Bahia and Salvador is hugged by a vibrant Afro-Brazilian culture, traditions and musical rhythms that seem to move and guide the daily life of El Salvador and Bahia in every step. 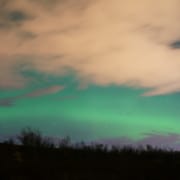 It can be quite the task to find the Northern lights, or so it seemed for me. I was in Iceland for 7 days and I finally saw them on the last night. I traveled all over Iceland with a camper van and I saw them in Reykjavik the night before my flight to Scotland. Unluckily during my trip there was a combination of either bad visibility due to clouds or a lack of activity with the Aurora Borealis (Northern Lights).

Everyday I would check the Icelandic Meteorology website, which tells you exactly how active the Northern Lights are: https://en.vedur.is/weather/forecasts/aurora/. I highly recommend this site and I found it to be extremely accurate.

My first impressions of the northern lights were inside the city of Reykjavik. I had just went to eat some food and grabbed a few craft beers from a local Mikkeller bar (which is actually from Denmark), but I was super happy to find their beer in Iceland. As I was walking back to my campsite a slight wavy light grabbed my attention in the sky. It almost reminded me of a spot light where they have a special event happening. But I didn’t get to see it very well. It made me stop on the side of the street and start staring into the sky for quite a few minutes. Suddenly about 30 seconds later I started to see waves of light drifting through the sky like a school of fish. It was amazing! But, little did I know, it was only the beginning. When I got back to my campsite I researched some areas where you should be able to get good pics. So, I spent most of the night trying to capture pictures of the Aurora Borealis. Here are my results: 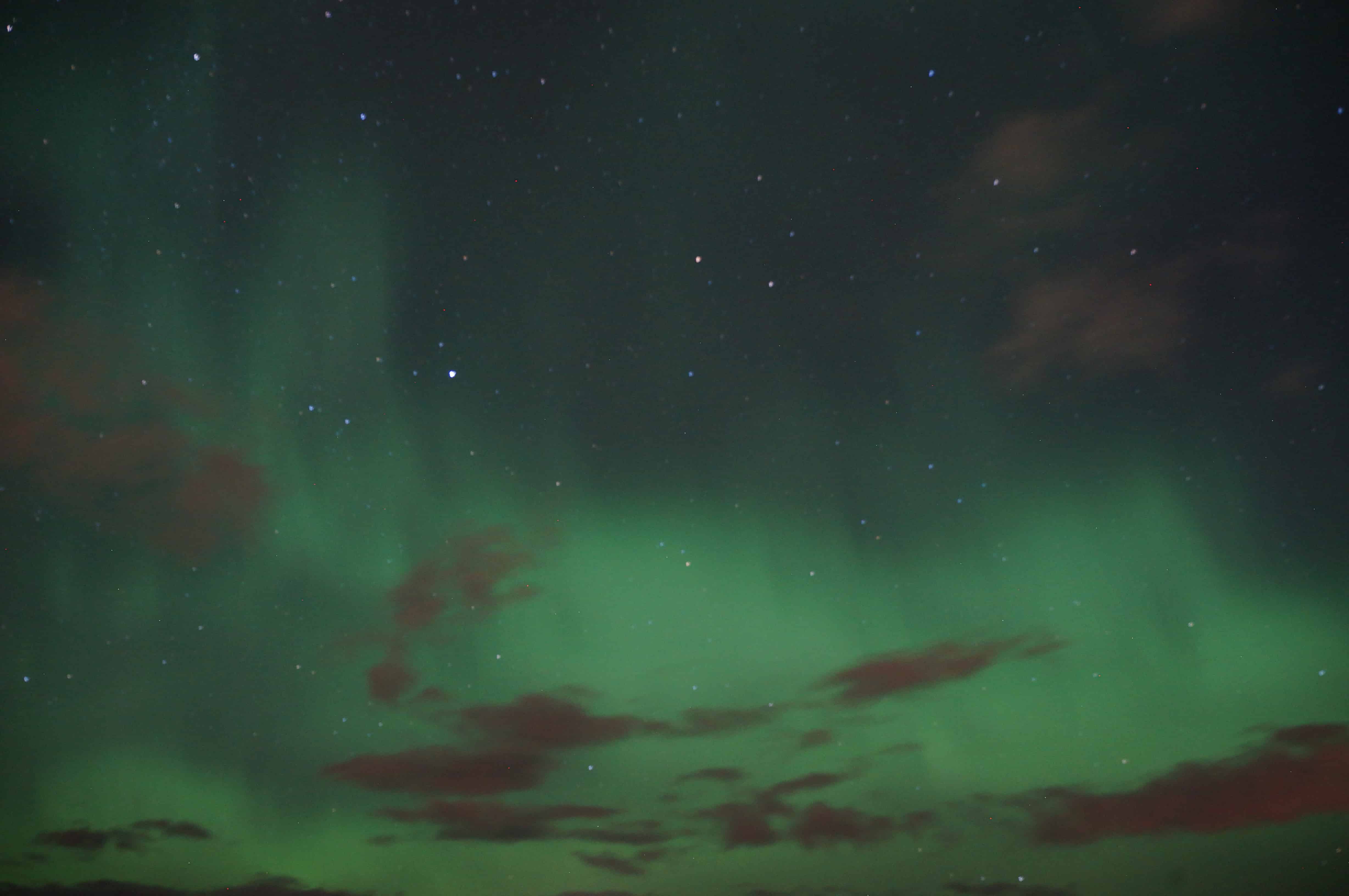 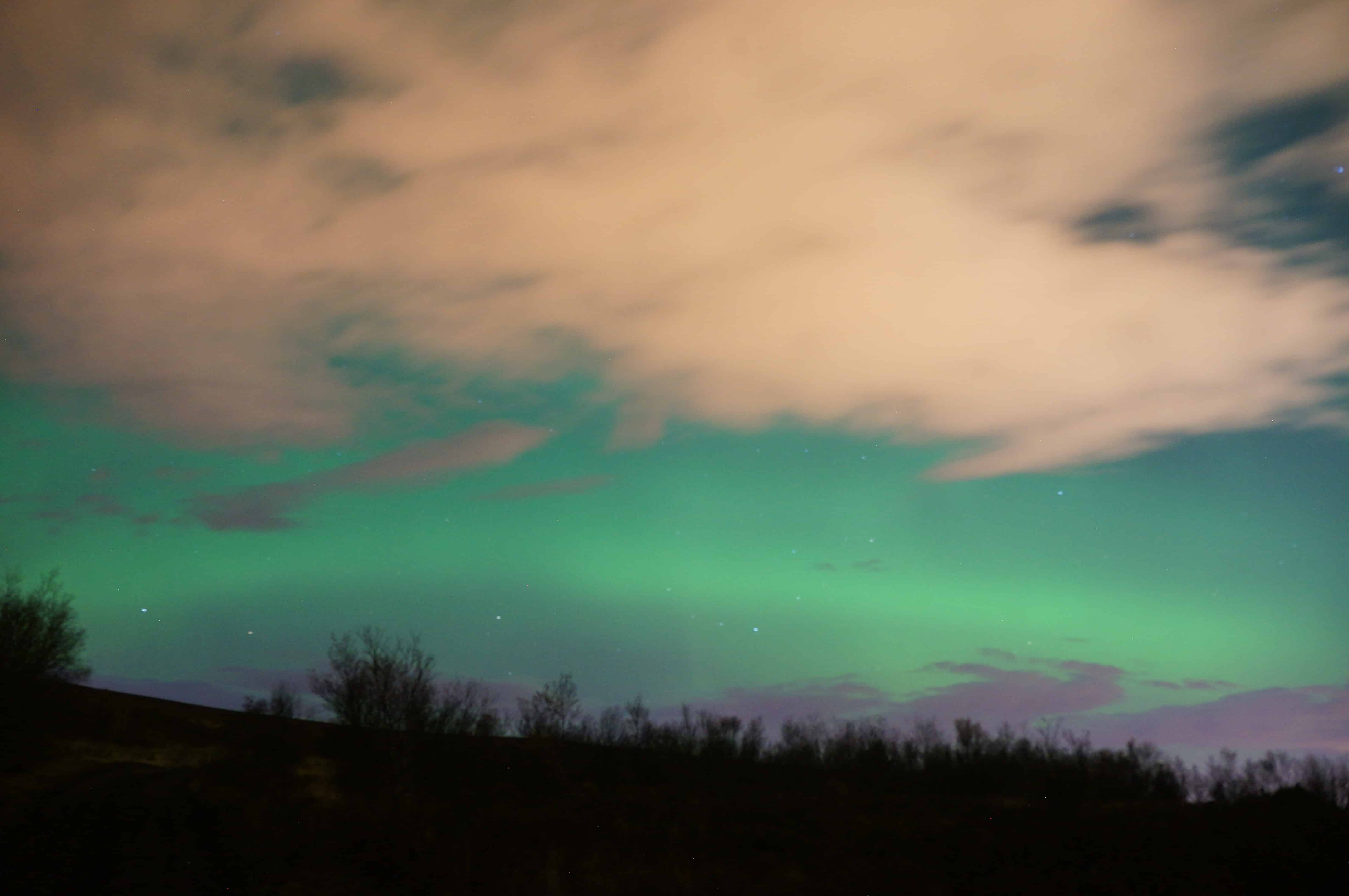